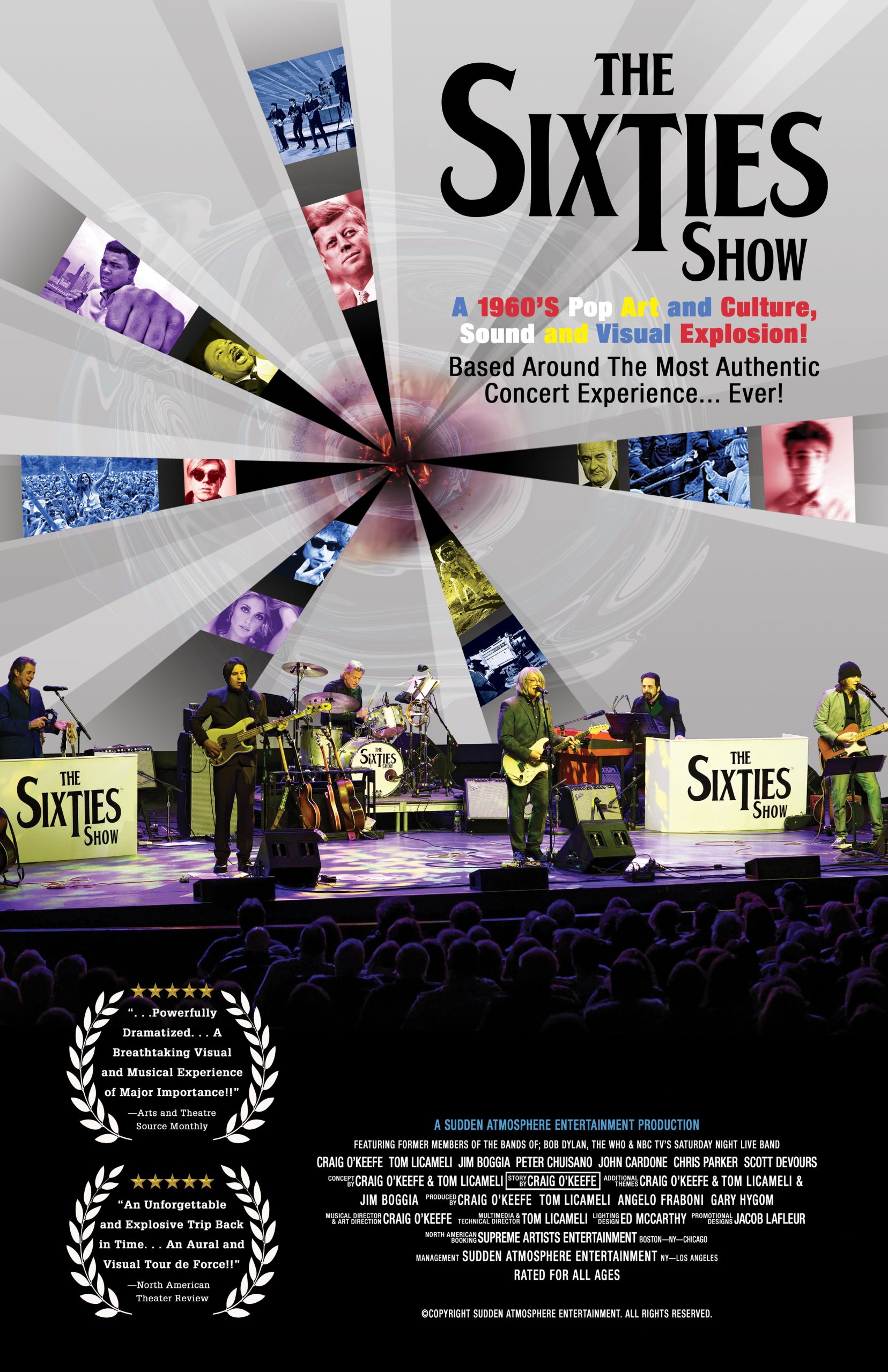 The Sixties Show is from NYC and is The Greatest 1960’s Musical Re-Creation Show on Earth. The band features former band members of The Who, Bob Dylan, and NBC TV’s Saturday Night Live band.

“ An Aural and Visual tour de Force!!”
“Powerfully Dramatized…. A Breathtaking Musical Experience of Major Importance!”
“…The Show is an indisputable Hit!!”
“An Immersive Historical and Musical Spectacle…A Must See!!”

This is a show about time travel , going back to the 1960’s, based and around the most remarkable musical re-creation show you will ever see.

This popular theater show is a cross generational crowd pleaser and has been selling out every theater and performing arts center that the show plays at. The band is widely celebrated and known for re-creating spot on, note for note re-creations of the hits, B-sides and deep album cuts from the greatest songs of the 1960’s.
In addition to the concert experience, the show is full multi -media Broadway type production that is powerfully dramatized by a combination of time travel special effects, narration, 60’s archival audio and newsreel footage and a light show. This seen to be believed bigger-than-life, Broadway theater styled show is nothing less than awe -inspiring.

The Sixties Show is a high energy trip back in time that reminds the audience how uniquely inspirational, entertaining, and historically significant the music and events of the 1960’s was and continues to be.

• All of the music is performed live, with no samples, backing tracks or prerecorded music of any kind.
• The band uses a state-of-the-art sound system but, only plays authentic 1960’s period vintage and re-issue vintage gear and instrumentation just like original artist’s and original recordings. This combined with genuine 1960’s mod costumes that the band wears only add to the meticulous detail and authenticity of this popular and powerful theater show.

The members of The Sixties Show were hand-picked to perform and record with Sir Paul McCartney, The Beach Boys, Brian Wilson, The Bee Gees, Mick Jagger, Bruce Springsteen and other legends and individually have performed at the most renown venues in the world such a Madison Square Garden, The Hollywood Bowl, Wembley Stadium, The Grand Rex in Paris, The Budokan in Tokyo and others.