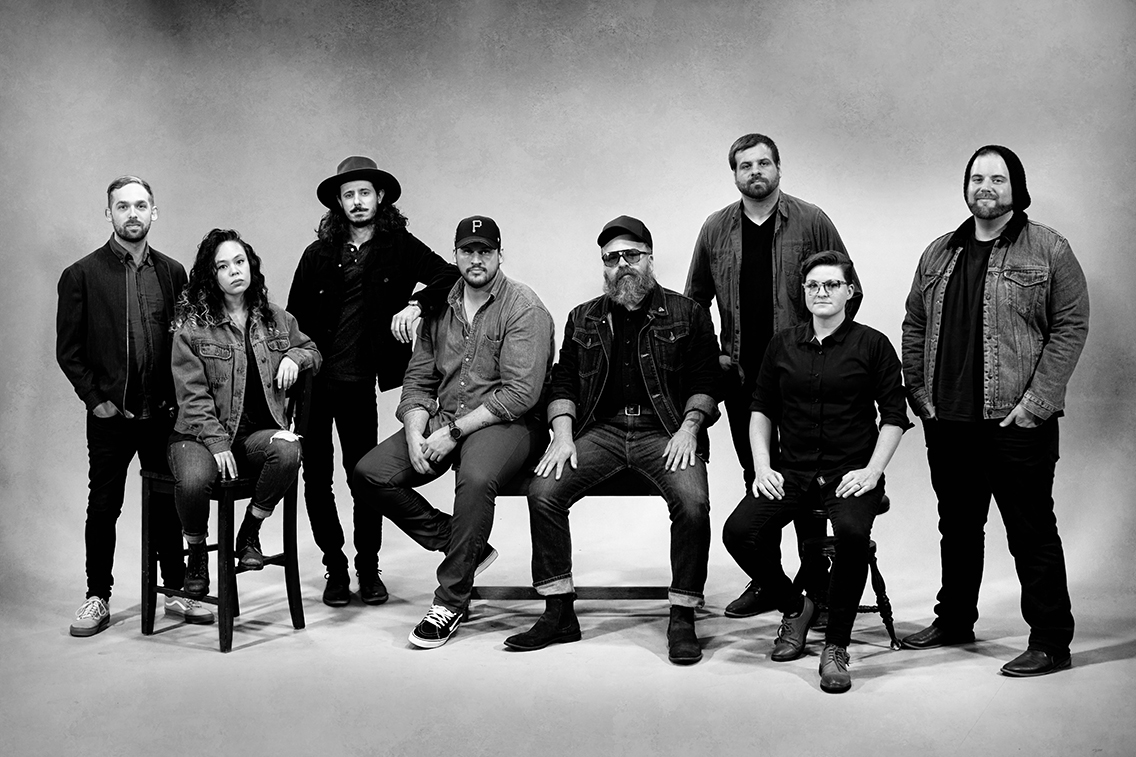 “This band is therapy for me to bring myself back to being a better person, and I hope people come along with me,” says powerhouse singer Clinton Clegg of The Commonheart. The testimonial begins on August 16th when the 9-piece band issues its most potent and purposeful dose of grittily redemptive rock n’ soul, its sophomore album, Pressure (Jullian Records).

Clinton didn’t grow up in a Baptist church, and his soul machine of a band isn’t pushing religion. Live and in the studio, the Pittsburgh-based collective is offering feel-good positivity, Golden Rule messaging, and sweat-soaked performances that nimbly ease through blues, vintage soul, and rock.

The nonet is bonded by familial-like ties and a desire to foster spiritual uplift. Among its ranks are female backup singers, drums, bass, guitar, a horn section, and keyboards. Out front is Clinton, a lightning bolt charismatic front man with dynamically expressive pipes that effortlessly traverse bluesy pleading, and honeyed balladeering. Onstage and in the studio, Clinton evokes B.B. King, Al Green, Otis Redding, and Sam Cooke.

The Commonheart is known to have transformative powers. Case in point is the band’s own singer. During one gig, while singing “Do Right” from Pressure, Clinton experienced a revelation.

“Seeing the audience’s reaction to the positivity in that song made me feel like I was giving them something they may need.” He pauses thoughtfully, and then continues: “You know blues music is sad as hell, but it makes you feel good. I thought maybe my bad stories could make people feel good, and I could bring a little bit of love to the show.”

Previously, Clinton was in an eclectic indie band searching for some semblance of artistic focus. He had grown up loving B.B. King and soul music, and recognized the strength of his raspy emotive voice. After some soul searching, he and that band’s drummer decided to do a back-to-basics band centered around Clinton’s singing and a vintage R&B-informed aesthetic. At first the band’s name was a casual variant of The Commonwealth, as in “The Commonwealth of Pennsylvania,” but the moniker later accrued significance as the band began to explore the pent-emotionality inherent in its gospel-tinged tunes.

The Commonheart’s latest album, Pressure, is both rugged and refined. The 10-song album showcases raw-nerve soul musicianship pristinely recorded. The opening track boasts soulful sandpaper-y lead vocals, swoops of cosmic slide guitar, a driving Sly Stone groove, and rousing female backup vocals. It’s an up-against-a-wall tune about making a living while raising a family, and it speaks to the album’s title. The bluesy ballad title track, replete with pleading emotive vocals, drips yearning and melancholy redemption. “That’s about the daily grind—what it takes to maintain important relationships while you’re away from home, driving thousands of miles in van to pursue a dream,” Clinton confesses.

A spirit of a new-day optimism courses through the aptly titled “Different Man.” The song soars with stirring group backup vocals punctuated by Clinton’s vulnerable confessions. It’s a rousing and uplifting slice of R&B brimming with warm organs, clipped soul-guitar chanks, and triumphant horn melodies. “That song is about begging for a second chance, and building something beautiful after a sordid past,” Clinton reveals.

Pressure is an album by a band on a mission. “We are willing to take risks and to go at any lengths for this band,” Clinton says affirmatively. “We are ready to spread positivity and make a stretch of this thing.”