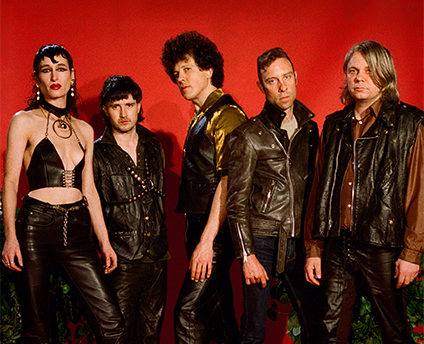 The Black Lips return with their 10th studio effort Apocalypse Love, scorched with their trademark menace, it cryogenically mutates all recognized musical bases; it spins yarns about vintage Soviet synths, Benzedrine stupors, coup de’ tats, stolen valor and certified destruction, all set against a black setting sun. Since the turn of the decade the band have transformed from austere country pioneers, into a set of Lynchian surrealists, hellbent on recalibrating the history of rock ‘n’ roll.

Singer and saxophonist Zumi Rosow muses, “It’s a weird dance record, one that reflects the moment that the world’s in right now…”

Apocalypse Love is an album that emanates from a dive bar jukebox in the back of your mind; with a playlist that bends between tub thumping doom-glam, Plastic Ono singalongs, cocktail-shaken space age pop, Morricone reverberations and lo-fi outsider acoustic-punk, with mariachi horns, theremins, drum machines and harmonies filtering through the infectious melodies.

“It’s a mix of all the influences that we’ve accumulated over the years,” says Jared Swilley, “Whether we’re doing an electronic song or a country song, it’s all filtered through us, there’s a distinctive way that we do stuff, so every song has our mark on it.”

Zumi continues, “We wrote the album during lockdown so we were all in different places, experiencing different things. ‘Apocalypse Love’ is just a great title, the perfect follow up to ‘The Black Lips Sing In A World That’s Falling Apart’ which ended up being quite prophetic.”

Cole Alexander, Black Lips’ guitarist and constant sparring partner of fellow original member Jared, reflects “Everyone in the band writes, so it gave us the chance to grow into that. We’ve had a lot of changes over the years and it now feels like we have a really strong line up, with Jeff (Clarke) writing and Oakley (Munson) on drums also contributing to the songs.”

“I’ve never really been an album guy,” says Jared. “Back in the 50s and 60s they didn’t really make albums they were just a collection of great singles.”

Sellotaped together with lavish arrangements and plenty of wayward noises to expand the Lips’ new panorama, Apocalypse Love is a smorgasbord; a soundtrack for
uncertainty, at the end of that long corridor in the Lips’ favored smoke-filled nightery.

Stand-out number ‘Among The Dunes’ is an amorphous platform-heeled anthem, a signature sax-fueled
stomper filled with trippy swagger. Opener ‘No Rave’ proffers a hypnotic locked groove, with Cole
Alexander’s trademark snarl delivered over a sulphureous wall of distorted hedonism, a dystopian anthem for an apocalyptic manifesto. Meanwhile, the twisted exotica of ‘Whips Of Holly’ with its silver screen façade is like the soundtrack to a classic Theda Bara vamp-fest.

As the band venture into their third decade, Apocalypse Love is proof that The Black Lips show no sign of slowing down…