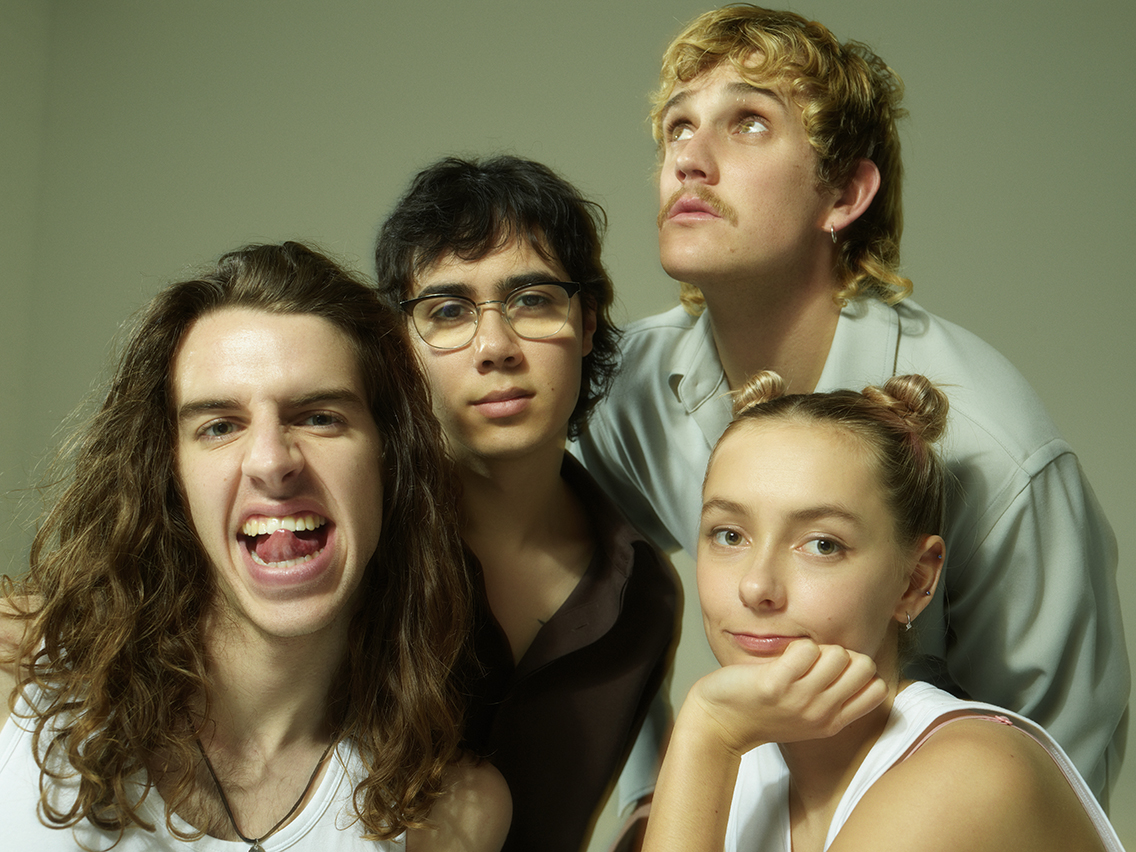 For the first two decades of his life, Caleb Harper couldn’t find a space that felt like his own, like where he was meant to be. A small-town coastal kid, Harper was raised by rather strict evangelicals, adhering to the harsh principles of a church founded in Arizona. Leaving home and escaping to college just after 17 didn’t actually help, either. Sure, he learned that the church’s black-and-white view of morality was restrictive and even harmful, but what else did school offer to save self-doubt and personal debt? If this were the promised land for smart kids with ideas, he craved the risk of the rest of the world. So he dropped out, began working in bars, and soon fell in league with a fun little rock band they playfully called Spacey Jane. Drummer Kieran Lama, guitarist Ashton Hardman-Le Cornu, and bassist Peppa Lane: With them, Harper, perhaps for the first time in his life, felt like he had happiness, fulfillment, and purpose, just like strings of generations of American kids who have fled one cloister or another for the real thrill of rock ’n’ roll.

Harper and Spacey Jane, however, are Australian, raised on the continent’s West Coast. Spacey Jane—the ebullient Perth quartet he co founded at the edge of 20—is now one of the country’s biggest, most magnetic, and endearing rock bands, having topped the country’s charts and gone platinum there more than half a dozen times already. They got that way by funneling the international blues of the modern young into lithe and irrepressible rock songs, tunes that expressly survey generational malaise and funnel them into songs that make you feel, as Harper sings, “that you’re probably pulling through.” Spacey Jane’s second full-length album, the honest and inspirational Here Comes Everybody, uses their recent success to foster more musical nuance and depth, but there is no trace of post-fame jadedness. Rather, these songs continue the hard work of pushing against a world that keeps pressing down, of fighting toward the other side of this mess we’ve made. These anthems are fully up to the task and it’s no surprise the album debuted at #1 on the Australian album charts.

Spacey Jane’s pandemic story starts like that of countless other bands—new momentum stunted by an unexpected and overwhelming international tragedy. For years, they’d sculpted a few dozen songs of sharp guitar jangles and bounding rhythms, the radiance offset by Harper’s entirely tuneful descriptions of his struggles. “There’s this expectation that your late teens and early 20s are the golden years, the best fucking time,” he says. “But the reality is that it’s not some great event, if you look at the difficulty of the world right now.” Australia agreed: Sunlight, Spacey Jane’s debut, catapulted toward the top of the charts, becoming ubiquitous during that first summer of lockdown. “Booster Seat,” a sleepy but sullen gem about watching your friends succeed from the sideline, became a timely anthem for an island ostracized by lockdown, grabbing the No. 2 slot on the year-end triple j chart. These are rarified feats for a self-managed band and a testament to their songs’ delightful tension between fun and frustration, excitement and ennui.

They couldn’t, however, leave Australia. Having given up his place for impending tours, Harper moved in with his father and retreated to a bedroom with an acoustic guitar, trying to suss out what kind of advice he might offer to other kids stuck between stations as he once had been and somehow still was. The songs that emerged hinged on the same vulnerability and candor that defined Sunlight—the depressed college kid studying cigarettes and booze to distract himself from tedium on “Sitting Up,” the mindless tasks used to still post-breakup sadness on “Clean My Car,” the endless apprehension of impostor syndrome on “Hardlight.” These songs sported a new sense of reassurance, though; they felt like detailed notes to Harper’s past remembered selves, reminders that he had made it through despair to find his place. You might, too.

When Spacey Jane finally reconvened to record, they decided to indulge in these songs, to give them more space and time than ever before. After all, they’d started as an electrifying live band, aiming to get people to party and dance in pubs; with tours on indefinite pause, they aimed, instead, to make the songs as rich as possible. In the Brisbane studio Empire, Harper and Hardman-Le Cornu explored assorted pedals and amps and synths, searching for sounds to fortify these sentiments. Lama and new bassist Peppa Lane tinkered with the rhythms, maintaining Spacey Jane’s core propulsion but augmenting it with an expansive thoughtfulness. Where Sunlight felt like a shot in the arm, Here Comes Everybody feels like a consummate statement, a dozen odes to hardship and resilience built at last with sounds that tell the fullness of that story.

With its bass throb, cascading chorus, and endlessly refracted guitars, “Lot of Nothing” stares down the despised side of oneself and tries to reckon with it, arriving at what feels like a lost Phoenix smash. “Hardlight” shimmers and shudders like an updated R.E.M., soft harmonies tracing the breathless quest for self-confidence. The mighty but tender “Haircut” addresses our endless struggle to reinvent ourselves, convinced that we’re only good if we’re growing like capitalism says we must. It is a hymn for the letting go, for trying to accept that doubt will never go away but you can at least deal with it. The brilliant “Yet,” a country-traced jangle, celebrates the importance of telling your friends how you feel and listening to them, of lifting one another up just by showing up. On Here Comes Everybody, Spacey Jane squares up to real struggles, climbs atop them, and shouts out loud about the process, at least a little victorious in mere survival.

In early October, after some 200 million international streams and successful tours in Europe and England, Spacey Jane will at last begin its first American tour. Some dates have already sold out—perhaps expected after such a lengthy pause and two spectacular albums that have reached far beyond Australia. And then in February, the entire band will move to California, setting up a new domestic headquarters for these snappy and perfect crystallizations of the international blues. After all, Harper spent the first 20 years of his life without a real sense of being or belonging. Now that he’s found it in Spacey Jane’s gospel of hard times offset by great hooks, why not live it fully? Isn’t that the point of all this, anyway—to push through, to find yourself, and then be it?