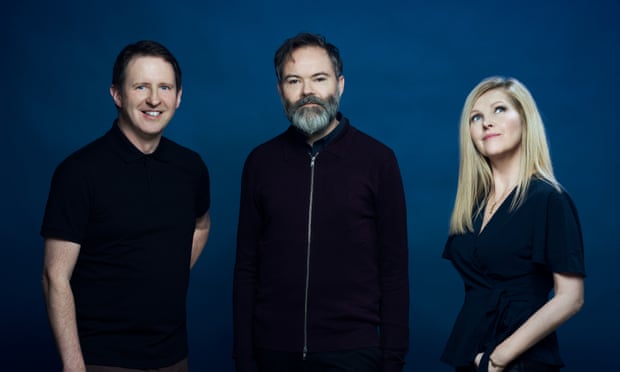 Like most bands founded by former music journalists, Saint Etienne were a highly conceptual group. The trio’s concept was to fuse the British pop sounds of ’60s London with the club/dance rhythms and productions that defined the post-acid house England of the early ’90s. Led by songwriters Bob Stanley and Pete Wiggs, and fronted by vocalist Sarah Cracknell, the group managed to carry out their concept, and, in the process, Saint Etienne helped make indie dance a viable genre within the U.K. Throughout the early ’90s, Saint Etienne racked up a string of indie hit singles that were driven by deep club beats — encompassing anything from house and techno to hip-hop and disco — and layered with light melodies, detailed productions, clever lyrics, and Cracknell’s breathy vocals. They revived the sounds of swinging London as well as the concept of the three-minute pop single being a catchy, ephemeral piece of ear candy, in post-acid house Britain, thereby setting the stage for Brit-pop. Though most Brit-pop bands rejected the dance inclinations of Saint Etienne, they nevertheless adopted the trio’s aesthetic, which celebrated the sound and style of classic ’60s pop.

The origins of Saint Etienne date back to the early ’80s, when childhood friends Bob Stanley (born December 25, 1964) and Pete Wiggs (born May 15, 1966) began making party tapes together in their hometown of Croydon, Surrey, England. After completing school, the pair worked various jobs — most notably, Stanley was a music journalist — before deciding to concentrate on a musical career in 1988. Adopting the name Saint Etienne from the French football team of the same name, the duo moved to Camden, where they began recording. By the beginning of 1990, the group had signed a record contract with the indie label Heavenly. In the spring of 1990, Saint Etienne released their first single, a house-tinged cover of Neil Young’s “Only Love Can Break Your Heart,” which featured lead vocals from Moira Lambert of the indie pop band Faith Over Reason.

“Only Love Can Break Your Heart” became an underground hit, receiving a fair amount of airplay in nightclubs across England. Later in the year, Saint Etienne released their second single, a cover of the indie pop group Field Mice’s “Let’s Kiss and Make Up,” which was sung by Donna Savage of the New Zealand band Dead Famous People. Like its predecessor, “Kiss and Make Up” was an underground hit, helping set the stage for “Nothing Can Stop Us.” Released in the spring of 1991, “Nothing Can Stop Us” was the first Saint Etienne single sung by Sarah Cracknell (born April 12, 1967), whose girlish vocals became a signature of the group’s sound. Cracknell was the main vocalist on the band’s debut, Fox Base Alpha, which was released in the fall of 1991. Following that release, Cracknell officially became a member of Saint Etienne; she had previously sung in Prime Time.

“Only Love Can Break Your Heart” was re-released in conjunction with Fox Base Alpha and cracked the lower end of the British pop charts. Saint Etienne were beginning to gain momentum, as the British press generally gave them positive reviews and their records gained them a strong fan base not only in England, but throughout Europe. Throughout 1992, the group released a series of singles — “Join Our Club,” “People Get Real,” and “Avenue” — which maintained their popularity. In addition to writing and recording music for Saint Etienne, Stanley and Wiggs became active producers, songwriters, remixers, and label heads as well. In 1989, Stanley founded Caff Records, which issued limited-edition 7″ singles of bands as diverse as Pulp and the Manic Street Preachers, as well as a number of other lesser-known bands like World of Twist. In 1992, Stanley and Wiggs founded Ice Rink, which intended to put out records by pop groups, not rock groups. The label released singles from several artists — including Oval, Sensurround, Elizabeth City State, and Golden, which featured Stanley’s girlfriend Celina — none of which gained much attention.

Preceded by the single “You’re in a Bad Way,” Saint Etienne’s second album, So Tough, appeared in the spring of 1993 to generally positive reviews and sales. Over the course of 1993, the group released three more singles — “Who Do You Think You Are,” “Hobart Paving,” and “I Was Born on Christmas Day” — which all charted well. In 1994, the trio began to lose momentum, as their third album, Tiger Bay, was greeted with decidedly mixed reviews, even as singles like “Like a Motorway” continued to chart well. After completing a new track, “He’s on the Phone,” for their 1995 singles compilation Too Young to Die, as well as the French-only single “Reserection,” Saint Etienne took an extended break during 1996.
Sarah Cracknell pursued a solo project, releasing a single titled “Anymore” in the fall of the year. Bob Stanley and Pete Wiggs began a record label for EMI Records, with the intention of releasing music from young developing bands. In the fall of 1996, Saint Etienne released a remix album, Casino Classics; a new studio effort, Good Humour, followed two years later, and the trio returned in 1999 with an EP, Places to Visit. The full-length Sound of Water appeared in mid-2000, featuring guest appearances by Sean O’Hagan (of the High Llamas) and To Rococo Rot. After a successful U.S. tour in support of Sound of Water, the group issued Interlude, a collection of new tracks, instrumentals, and B-sides, in early 2001. A year later, the trio followed up with Finisterre, and Tales from Turnpike House arrived in 2005.
Following a seven-year break during which the bandmembers worked on making films, doing remixes, and various solo projects, musical and otherwise, the band resurfaced in 2012 with Words and Music by Saint Etienne, an album loosely based on the concept of how music can affect and shape lives unexpectedly, both positively and negatively. It would be another five years before they released new music, but, as ever, the bandmembers kept themselves busy with other projects in the meantime. Cracknell signed to Cherry Records, and released the solo album Red Kite in 2015; Stanley’s second book, Yeah! Yeah! Yeah!: The Story of Pop Music from Bill Haley to Beyoncé, was published in 2014; and Wiggs contributed the soundtrack to the film Year 7.

After the band played a series of shows in 2016 to commemorate the 25th anniversary of Foxbase Alpha, they decided it was time to record some new songs. They selected producer Shawn Lee and began writing songs inspired by the counties in the southeast of England where each of the bandmembers spent their teenage years. Working quickly with Lee and his studio full of vintage instruments, the record, titled Home Counties, was finished in three weeks and released in June of 2017 by Heavenly. ~ Stephen Thomas Erlewine