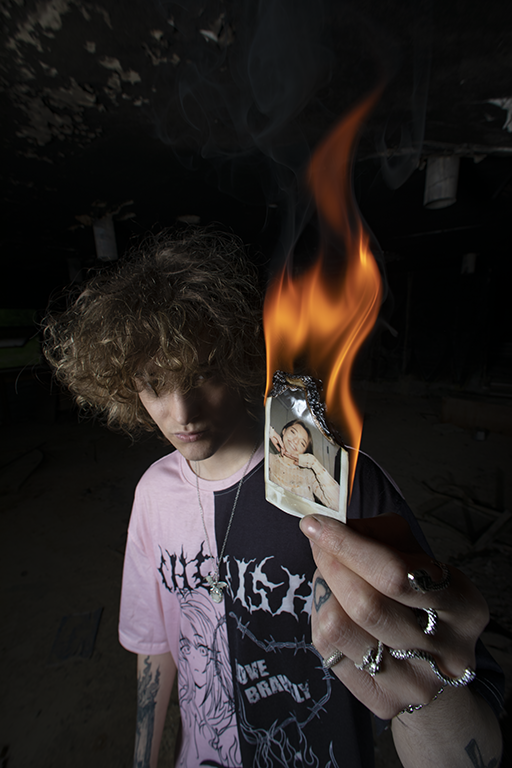 The small town of Verdal in Norway is not an obvious place to search for music’s next big thing. Truthfully, it’s not somewhere to go looking for much at all. “It’s a very small place,” shrugs 21-year-old Anders Aakerhus – otherwise known to you, me, and, soon enough, the world as plxntkid. “It’s a town of maybe 15,000 people. There’s a cinema, a couple of grocery stores. Trondheim, the nearest big city, is two and a half hours drive away. Oslo, where I now live, is eight hours away. You are very cut off in Verdal.”

Asked what there is for young people to do in a town so isolated, Anders replies simply, “Hang out with your friends and play X-Box.” As for anything approaching a music scene? Well, there’s a local community centre “where you can go and learn to play instruments”, Anders explains, or there’s the annual local festival sees revellers dress up in “early 1900s farm clothes and drive tractors through the streets” to the sound of country music.

How, then, plxntkid has built a loyal following of fans, amassed some 5 million global streams and recently signed with legendary label Epitaph Records – all from his bedroom – is a story of both this most ordinary of places and Anders’ extraordinary talents.

That story begins with a mother’s love of AC/DC. “I loved the energy of it,” Anders smiles. His parents weren’t musical themselves but, aged nine, on Christmas Day he unwrapped a guitar that had been sat waiting for him under the tree. Soon he was taking lessons and dabbling in bands. He bashfully laughs at the memory of being onstage at the age of 13 and valiantly plucking away at covers of Pink Floyd and Guns N’ Roses, his eyes nervously fixed to the floor.

If you were to ask Anders around this time where his foremost passion lay, he would likely have responded not with music, but Taekwondo; his prodigious martial-art talent seeing him regularly compete in – and win – regional and national tournaments.

Yet it was also around the age of 16 that Anders’ journey would take a sharp turn, when the engaging but shy young man was diagnosed with OCD and anxiety. “Part of my OCD is about germs,” he explains, “which meant I couldn’t handle being around people as they were sweating, and that kind of stuff, so I chose not to continue with the Taekwondo.”

In its place came music. By now, Anders had discovered punk rock, and the sounds of Sum 41, blink-182 and Green Day, along with the emo, post-hardcore and metalcore sounds of bands such as Pierce The Veil and Bring Me The Horizon. “It was all so different from what I had heard,” he explains.

None of his friends, however, shared in the music he was discovering, or the seriousness with which he was now taking it. “That’s when I discovered the Soundcloud community,” he explains. “I had always grown up around computers, as my dad is a huge computer nerd, so I got some money and I bought myself some speakers, a microphone and some music software.” Crucially, the community offered the socially-awkward Anders a necessary anonymity. He hid his music from those nearest to him (even going so far as to tell his mum he was simply singing along to music when she inquired as to the noise coming out of his bedroom), instead turning to new online friendships and YouTube to learn his craft. “I was embarrassed at the time, and I didn’t want anyone to know I was making music. But the SoundCloud community is very supportive. I could make my music under a [pseudonym] name; I would send other members my music or ask them how to do something if I didn’t know. It’s a great community.”

At first, Anders’ low-fi beats were purely instrumental; after a year or two of experimenting with sounds, he found the desire to introduce vocals. “I simply wrote what I was feeling at the time,” he says. “Because I wasn’t really writing as

Doing so was about more than simply penning lyrics, too. “I used to go to therapists to discuss my anxiety, but after years of trying different therapies and techniques, I didn’t find anything that worked,” he reveals. “A big part of coping is my music; I think it’s unlikely that I would be making music if I didn’t have these problems. Writing lyrics about what is going on in my head was the best therapy for me.”

The music of plxntkid today bears all the hallmarks of Anders’ earliest experimentations –the accessibility, vulnerability and relatability that first attracted attention from a burgeoning online fanbase to songs about “love, depression and loneliness”. That connection was immediate, unique, and sincere. “A big part of why I still continue to make music is because it is not just for me anymore,” Anders says. “I regularly have people message me saying that my song is helping them through a rough time, and that is one of my biggest motivators for making music. I think a very large amount of people struggle with depression, anxiety, or trauma.”

He describes signing with Epitaph Records as “unreal”, the label’s name topping a wish list of potential partners that he made one day with his manager, thanks both to its historical rooting in punk but also its modern-day elevation of plxntkid’s peers like guccihighwaters and Lil Lotus. As Anders himself puts it: “I’m signed to a punk label, so why not make the music that I’ve always wanted to make?”

Where plxntkid grows from here, even he is unsure. It’s what marks him as a star to be watched with the keenest of eyes. Anders Aakerhus is a long way from Verdal now, and he’s never looking back.