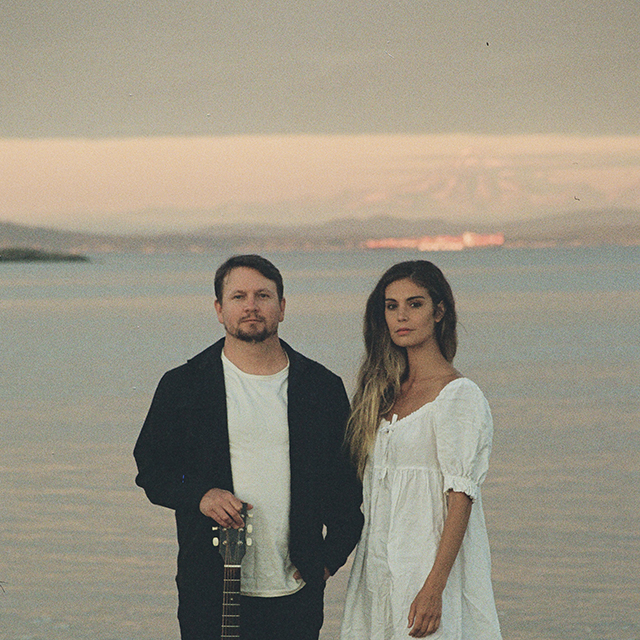 Ocie Elliott lean into the natural interplay of Jon Middleton and Sierra Lundy. At this intersection, their harmonies absorb a creative ebb and flow between extremes of instinctual intuition and careful calculation. The Victoria, B.C. duo dream up dusty folk painted in broad strokes of acoustic instrumentation and lyrical eloquence meant for nights under the stars, long drives with no destination, and quiet moments of reprieve. After racking up over 50 million combined streams and receiving acclaim from American Songwriter, Atwood Magazine, PopSugar, and more, the pair cement this balance on their 2020 EP, Slow Tide [Nettwerk].

“We complement each other very well,” says Jon. “I let loose and constantly write. Sierra is more particular and measured. I’ll finish ideas, and she’s very intuitive in terms of where things go. She forces me out of my comfort zone, which is my favorite part of working together. She inspires me to be more mindful of what I’m writing. It all comes together in our harmonies. In a way, we share the same brain.”

Ocie Elliott came to life in 2017 on EP. The five-track set yielded fan favorites such as “I Got You, Honey” (1.9 million Spotify streams) and “Down By The Water” (1.6 million Spotify streams). In between sharing stages with everyone from Mason Jennings and Sons Of The East to Kim Churchill and Joshua Hyslop, they launched a series of covers on YouTube shot in the backseat of their Honda CRV, performing intimate renditions of Elliott Smith, Gillian Welch, John Prine, and Simon & Garfunkel, to name a few. On the heels of 2019’s We Fall In, the single “Run To You” appeared in a slew of television shows, including Grey’s Anatomy, Batwoman, Legacies, Charmed, Stumptown and Sweet Magnolias.

2020 proved to be their most prolific year yet kickstarted by In That Room. Within a few months, the single “Be Around” generated 1.6 million Spotify streams. Maintaining this momentum, they unveiled the Tracks EP to critical acclaim. Atwood Magazine promised, “With their gorgeous vocal harmonies, their blissful guitar and harmonica playing, and their dazzling poetry, Ocie Elliott will inspire and delight listeners through ‘Tracks’,” while American Songwriter called it “tender and timeless.”

At the top of the summer and in the midst of the Global Pandemic, Sierra and Jon retreated to an oceanside bungalow in Ladysmith on Vancouver Island for three days. The peace around them melted into their songwriting.

“It was quite a magical place,” Jon goes on. “Once we got there, it was the point where the EP really came together. In the Pacific Northwest, nature is humbling and meditative. It makes you cognizant of something bigger. During fall and winter, the weather brings you inside of yourself. You spend a lot of time in your thoughts. We wrote two songs on this retreat and wrapped everything up.”

The first single “Back Door Run” relies on a delicate push-and-pull. Gentle reggae-style upstrokes on an acoustic guitar peek through organ swells as Sierra’s breathy vocals bristle with emotion.

“We had gotten in a ridiculous fight,” he recalls. “Sierra was mad I didn’t sing in falsetto more. She left, and I sat down and started singing in falsetto to spite her. The melody for ‘Back Door Run’ came out of me. The song is about an emotionally destructive relationship that’s so powerful, but it doesn’t work at the same time. It reminded me of the show Big Little Lies.”

Amidst strains of electric guitar and Omnichord, piano drones at the crest of the title track “Slow Tide” as Jon’s voice glides over the echoes.

“It captures where our mental state was as a touring band suddenly not allowed to tour,” he sighs. “We needed to feel like there was still a world outside. We were looking at a bluff over the ocean, and it made us feel alive again.”

Their voices entwine on “Take Me Home” just above a background of faint guitar before a harmonica lead. “It’s the moment where crippling anxiety hits you, and you need someone to rescue you and make you feel at home again,” he admits.

Then, there’s “Now You Don’t.” Another product of the retreat, the nostalgic lyrics conjure wistful memories amidst a fragile backdrop. “It’s about the elation of finally being free,” he elaborates. “When you come home after traveling, it feels so great. When you finish school and go on summer break, there’s nothing better.”

By achieving balance together, Ocie Elliott might just help listeners do the same.

“With any of our music, we want people to develop an emotional bond,” Jon leaves off. “Even if it’s just simple aural pleasure, we hope they connect. We put our hearts and souls into this. If you feel it, that’s all we could ask for.”