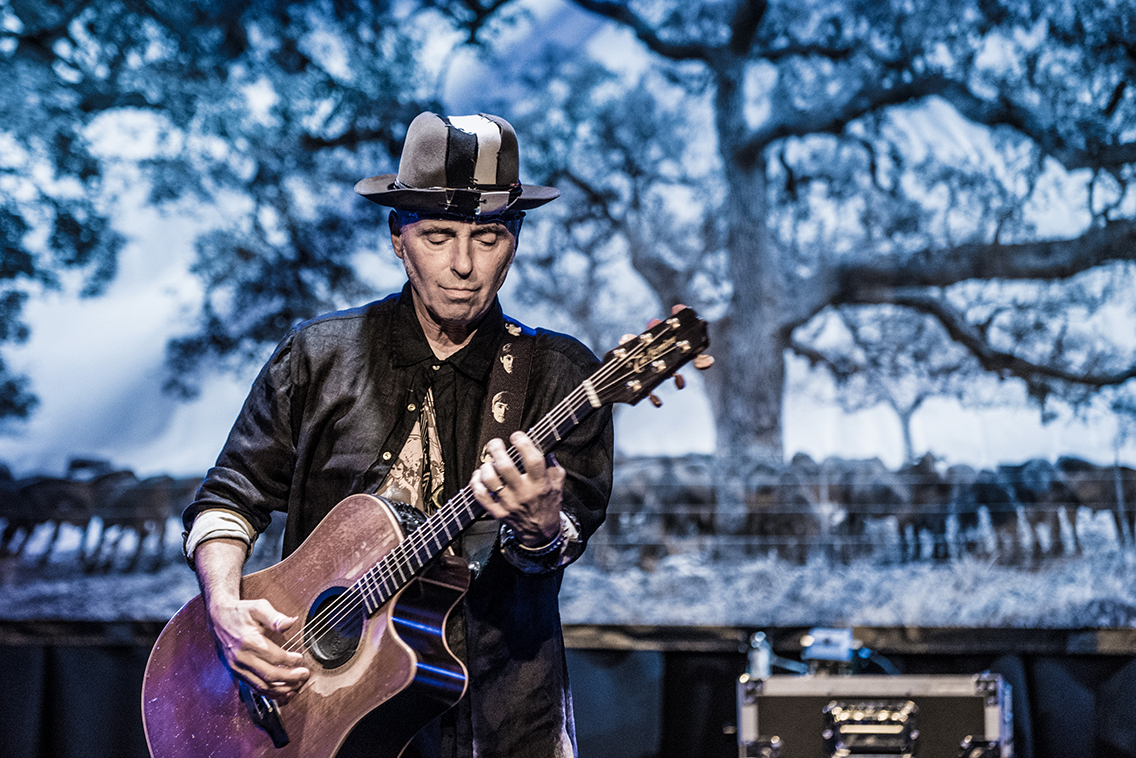 Nils Lofgren is Rock and Roll personified. A world-renowned singer, songwriter, multi-instrumentalist, and Rock and Roll Hall of Fame inductee as a member of the E Street Band. Nils has been touring and recording his own music for 46 years.

Lofgren’s storied career began when he was still a teenager. He was touring with his band Grin at 17, when he met Neil Young, and wound up playing on Young’s landmark After the Gold Rush album, and later the Crazy Horse debut and Tonight’s the Night. Grin would go on to release a quartet of albums loved by critics, but little noticed by the public. This pattern continued during Lofgren’s solo career, which produced should-have-been-hits, but revered fan favorites like “I Came to Dance,” “Keith Don’t Go” and “Cry Tough” during the ’70’s.

While perhaps best known now for his work with Springsteen, Lofgren has a resume that is amazingly diverse and star-studded. Besides his work with Young (Lofgren later played on Trans and Young’s MTV Unplugged show and most recently on the 2019 release Colorado ), he has recorded with music legends Jerry Lee Lewis, Del Shannon and Carl Perkins, collaborated with Lou Reed and toured with Ringo Starr. His rock roll-call includes Rod Stewart, Bob Seger, Paul Rodgers and Stephen Stills, but he has also played with Cab Calloway, Willie Nelson, Branford Marsalis, Rick James and George Benson.

In 2015, he released a new album: UK2015 Face the Music Live, which captures the magic he made that year touring the United Kingdom with his longtime collaborator, the multi-instrumentalist Greg Varlotta The resulting fifteen tracks span Lofgren’s long, memorable career — from “Lost a Number,” a gem from his early days fronting Grin to “Miss You ‘C’,” written in honor of the late E Street sax man Clarence Clemons. Throughout Lofgren demonstrates why he has long been heralded as a guitar hero, whether it is with his searing electric guitar work or his intricately nimble picking on an acoustic. UK2015 Face the Music Live has quickly garnered praise for spotlighting Lofgren’s “well-wrought material and an effervescent performing style.”

Lofgren’s Face the Music tour followed the 2014 release of his monumental Face the Music box set, a nineCD/one-DVD retrospective covering near five-decade career that was roundly admired by critics. Charles Pitter, in Pop Matters, called it a “testament to Lofgren’s impressive career and demonstrates Lofgren is a lot more than just a notable sideman,” while American Songwriter’s Hal Horowitz hailed it as a “terrific and lovingly curated set that displays the impressive life’s work of a classy, talented, journeyman rocker yet to find the commercial or critical acclaim he deserves.”

In 2019, Nils released the critically acclaimed album Blue With Lou, an all-new collection featuring a dozen of dazzling, forceful songs, half of which were penned in collaboration with the late, legendary Lou Reed. Lofgren began shaping those tunes and refining his own new original songs during his stint with Bruce Springsteen’s E Street Band during the group’s River Tour in 2016. All captured live in the studio following a solid week of rehearsal time with the rhythm section, the newly recorded Lofgren-Reed compositions — “Attitude City,” “Give,” “Talk Thru the Tears,” “City Lights,” “Don’t Let Your Guard Down,” and “Cut Him Up” — exhibit the combination of swagger and sensitivity that has always characterized the work of both artists. Riding a sound that is straightahead and largely unadorned, save for a small men’s choir and the featured vocals of Cindy Mizelle, Blue With Lou is as direct and hard-hitting as any recording of Nils Lofgren’s long and distinguished career.

Following the release of Blue With Lou, Nils took the band that recorded the album out on the road for his first tour with a band in 15 years, and based on a suggestion from his wife Amy, recorded the shows, the pick of which became his latest release, Weathered. Andy Newmark on drums (John Lennon, Sly Stone, David Bowie, Eric Clapton…) Kevin McCormick on bass, vocals (Crosby, Stills and Nash, Jackson Browne, Melissa Ethridge, Keb’ Mo’…) Cindy Mizelle on vocals (Luther Vandross, Whitney Houston, Steely Dan, Bruce Springsteen…) and Tom Lofgren on guitars, keyboards, vocals, who’s been playing with Nils since his early band Grin, combine to create a fresh, inspired take on these classic Nils songs. “Turning up to ‘eleven’ and wailing inside this amazing band was a joy and revelation to me, having been away from playing with my own electric band for so long,” Nils shares. “Proud to share this rough and ready collection that breathes new life and inspiration into the best of my songs.”

Prior to the release of Weathered, Nils reunited with the rest of the E Street Band in the recording of the forthcoming Bruce Springsteen release Letter To You in a record five days. Nils says “After 36 years in the band, “Letter to You” represents Bruce and the E St Band at our finest. Recording these great songs live, all together again, was an honor and a joy. So grateful they’re being shared with the world.”

When Will Hermes, in Rolling Stone, proclaimed that “there are ‘musician’s musicians,’ and there’s Nils Lofgren,” it wasn’t idle praise. Nils was honored recently with the “Outstanding Contribution Award” at the Classic Rock Awards held in London. Lofgren joins esteemed company of previous winners who have included fellow Rock Hall of Famers Jeff Beck, Ronnie Wood and John Paul Jones. Lofgren has enjoyed an incredible career and he is still going strong. To quote music critic Stephen Thomas Erlewine, Nils Lofgren is “a rocker unlike any other.”