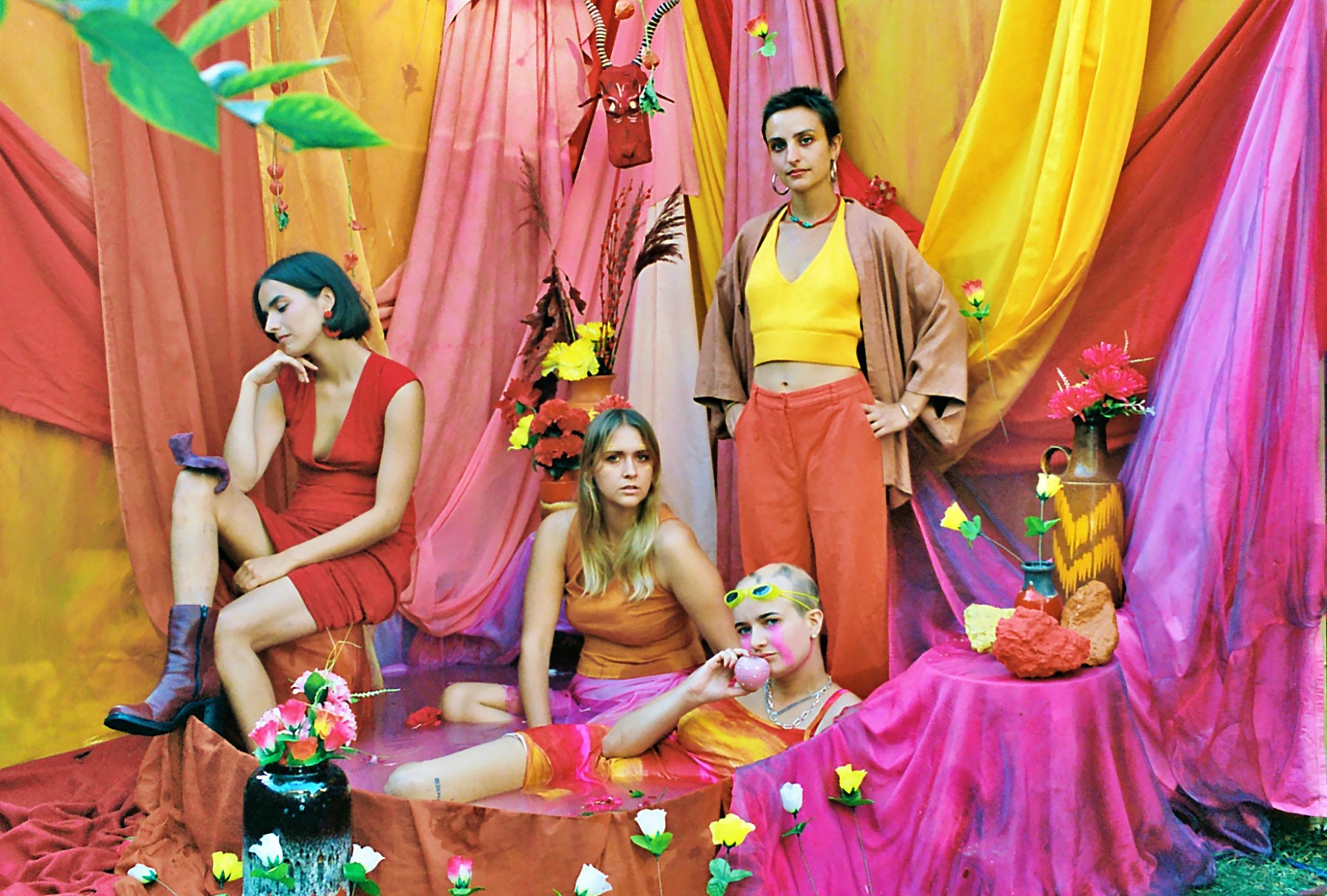 Who are goat girl – basic info and history

Goat Girl originated in 2015, when the four Londoners (Lottie Cream, L.E.D, Naima Jelly and Rosy Bones) came together through their love of music and like-minded attitudes, continually crossing paths at a number of gigs and open mic nights across South London. The quartet’s combined talents and enthusiasm resulted in a uniquely defiant sound with conscious lyricism, all of which wasted no time in pricking the ears of legendary British record label Rough Trade. Using the Brixton Windmill as a sounding board, the warped, country-tinged sound of their debut album Goat Girl engulfed the sonic and social landscape that the band were surrounded by, citing fellow performers Bat-Bike, Horsey, Meatraffle and Warmduscher as influences. The Brixton Windmill is a venue that was and continues to be a breeding ground for Goat Girl’s creativity, and is an important element of their growth – so much so that it’s where the band met their new bassist (Holly Hole), who felt like a natural fit from day one and would take the place of Naima Jelly on bass after the first album.

What is this new album called – other key album info

Goat Girl’s sophomore album, On All Fours veers away from the confrontational lyricism of their angst-fuelled self-titled debut, to a previously unseen depth and vulnerability. This nuanced shift in lyricism indicates Goat Girl’s maturing perspectives in discussing the world’s injustices and social prejudices, using the music to explore global, humanitarian, environmental and mindful wellbeing. On All Fours is a creature we come to know as emblematic of all our world’s beauty and monstrosities rolled into one that breathes and lives in a strangely comforting idiosyncrasy. Aided by Goat Girl’s new interchangeable approach with instrumentation and songwriting, On All Fours showcases the pinnacle of the band’s collaborative artistry, which acts as a catalyst for fresh sonic territory. Goat Girl’s frequent use of sci-fi synthesisers, off-beat chord progressions, analogue drums machines, diverse vocal styles and distinct, gritty guitars fuse a musical language that expresses both former characteristics and newer developments of the band’s sound and vision.

Atypical for a second album, On All Fours was built from numerous home demos, phone recordings and relentless jamming, taking what we know about Goat Girl to a fresh and ripened place. Goat Girl’s enthusiasm to experiment with synthesizers, percussion and analogue electronics has proven to expand On All Fours far beyond any four corners. Allocating their number one guy – synth whiz, friend and producer Dan Carey to bring the album to life, their thirst for electronics was given structure, knowledge and a nest to thrive in. After introducing Dan to the new songs, he suggested the band borrow his MPC drum machine and his studio in Streatham so they could practice playing with pre-programmed beats in order to hone in on the electronic undercurrents that would later be captured on the album.

From the textural, Broadcast-inspired synths that shine through in the uplifting electronica of ‘Where Do We Go From Here?’ to the dizzying percussive loops on ‘Egos’ and ‘Closing In’, Goat Girl’s penchant for left-field sonics presents an interesting counterpoint to the band’s dirty, guitar-driven sound. Similarly, ‘Sad Cowboy’ sees Goat Girl climb to anthemic techno heights, actualised by a zealous synth pattern that hammers chords of ecstasy, whilst ‘Jazz (In The Supermarket)’ incorporates unhinged trumpet parts and maddening layers of viola. Using their voices to convey an array of emotions, soulful harmonies sit firmly at the forefront on ‘Never Stays The Same’ and ‘Anxiety Feels’. Elsewhere on the album, frustration surfaces in the powerful incantations on ‘Pest From The West’ and ‘P.T.S.Tea’. Using visceral and abstract imagery on later tracks ‘They Bite on You’ and ‘A-Men’, On All Fours is a bold exploration of darkness and light. The often weighty subject matter of Goat Girl’s lyrics contrasts with the eerily triumphant tones; a tool which is used to unmask the suppressed, further exposing the absurdity of modern life. Raising pressing issues from global warming to social injustices, censorship and struggles with mental health, Goat Girl’s new collaborative songwriting approach is a manifestation of their collective ideals.

A break down of the 4 ‘singles’
The anthemic ‘Sad Cowboy’ was originally written from a catchy guitar riff that Lottie had on her phone. She said: “I quite liked the idea of writing this song so that each section was just as important as the other. I think my understanding of the song consisting of equal sections was influenced by it stemming from a guitar riff I’d made, which is played in the intro, sung in the spatial sounding chorus and taken apart in the verse with the guitar’s melodic jabs and fast paced rhythms. To me, it’s what the song centres around”. The song changed sonically when introduced into the band setting. Drums and bass heightened the kinetic energy, whilst Ellie ditched her guitar and took to the minilogue synth, enhancing the song’s anthemic core throughout. Ellie says: “I remember when I found that preset on Holly’s synth, it felt so right with the grittiness of Lottie’s guitar. But there’s no doubt it also had that cheesy-club-feel, so we nick-named it ‘Ibiza’, and it ended up being in the outro.”
Lottie explains that her lyrics for the song “Sad Cowboy centres around the idea of losing a grip on reality and how often this can happen. When you’re within a world that constantly makes you feel as though your living out a really bad dream, disillusionment is inevitable”.

The original demo for ‘The Crack’ was entirely electronic and made on Garageband, consisting of an aggressive beat with a repetitive hi-hat a bass line written on synth-bass.
Ellie explains: “The lyrics were formed from quite a strong visual that I had in my head: In the song, I use ‘the crack’ as a metaphor for both the hidden and the visible scars left on the planet by human beings; the holes in the ozone, nuclear war, over-farming, fracking, etc. The song changed form when introduced to a band setting for the better; it gained more structure and the initial demo didn’t really have a chorus, so we wrote a new one which intensifies the essence of urgency.”

‘Badibaba’ was written in L.E.D’s mum’s garage in Deptford, which is where Goat Girl wrote the majority of On All Fours. It started out as a jam, with Rosy Bones and Lottie Cream on guitar, L.E.D on bass and Holly Hole on drums. This switching around of instruments and endless messing around with ideas and melodies was a crucial part to the writing of the second album, and combined the fours desire for a non-hierarchical approach to music making, ‘Badibaba’ one of the first to take to this new format. L.E.D explains: “I started to sing a vocal melody in the practice room but didn’t yet have lyrics so I started singing ‘badibaba’ as a filler- I guess I’m kinda shy when it comes to writing lyrics on the spot. I instantly liked the song because of the driving energy of the rhythm section and Lottie’s descending plucked guitar, so I recorded it on my phone and worked on lyrics at home.” Lottie adds, “I remember when this song started to take shape in the garage, we had been chanting this vocal melody over and over whilst the drums beat and guitars strummed, we were all so transfixed that we managed to free ourselves from the judgement and predetermination that sometimes comes with collaboratively writing.”. L.E.D sheds some light on the verse lyrics: “It’s about parasitic relationships with the Earth. When I began writing the lyrics, I was wondering if a human action can be selfless. This thought influenced the opening line ‘Tainted from our imperfections’. Throughout time people have killed and been murdered because of skin tones and belief systems, with the idea that there is one concept that is right for all, which seems absurdly egocentric, and causes destruction and pain. ‘Carry on like we’re protected, as if we’re unaffected’ – This line is about extension and modification of human life outside of natural means, for example, curing diseases which are viewed as a defect to the human body and extendending lives, whilst too often forgetting that the earth is one big, fine-balanced, living mechanism that needs protecting too.”

The song ‘Anxiety Feels’ took form when the four started experimenting from a recording L.E.D had presented. This way of working meant that the band could start from a place of certainty whilst enhancing and exaggerating certain moments as a reaction to interpretation. L.E.D goes on to explain the meaning behind the lyrics. “‘Anxiety Feels’ came from a place of loneliness and indecision. I (L.E.D) was suffering from quite extreme panic attacks at the time, triggered by anything from someone looking me in the eyes as I walked down the road, to even the idea of having to make conversation at the corner shop, or meeting a friend. The lyrics are almost an internal dialogue whereby I’m weighing up the decision of taking anti-anxiety medication. I’ve witnessed the effects of certain medications on people close to me with mixed reviews and have always felt that solely as a personal choice, I prefer to find a more organic coping mechanism. The song explores floaty outer-body feelings and my anxiety’s surprising physical manifestations in the body: ‘take my head and my hands, this wasn’t planned, can’t stand it’. More recently, I’ve started to see anxiety as a part of myself, rather than a separate thing I need to be rid of. This new shift in perspective has been hugely remedial and has allowed me to feed it whatever alleviates it and avoid whatever ignites it. So I avoid heavy drinking and stimulants, I’ve taken up yoga, deep breathing, running and taking baths. Learning that we’re not all built the same, I’m beginning to discover what nourishes me. ‘You can only love someone else if you love yourself’ always sounded well corny to me, but now I understand that self-love isn’t about a vain self-image, but more a deeper connection and understanding of yourself, what makes you feel happy and free, and therefore able to be compassionate. If you’re kind to yourself, then your cup will overflow and you’ll be able to share it with others.”