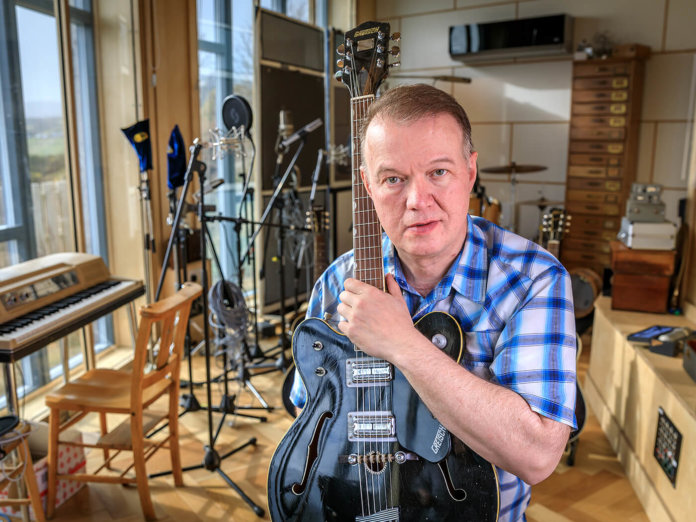 Edwyn Collins was front man for celebrated Scottish indie band Orange Juice. He later carved out a solo career (which included the global 1994 hit ‘A Girl Like You’: a Novello winner, a noted producer, a sought-after collaborator. In February 2005, two days after complaining of feeling unwell, Edwyn suffered a cerebral hemorrhage and was rushed to intensive care in London’s Royal Free hospital. Days later, he suffered another.

With the help and support of Grace, Edwyn recovered. During that extended time off, he worked on drawing, especially depicting birds and woodland creatures, that appear on his 2010 album Losing Sleep. The album featured guest appearances from The Cribs, The Drums, Franz Ferdinand and Little Barrie, which showed that Collins was well on the road to recovery. He continued to get stronger, and he and James Endicott, a former A&R man at Rough Trade, formed a new label, Analogue Enhanced Digital, to release further records by Collins, new artists and old friends like Roddy Frame (of Aztec Camera fame). Edwyn continued a regular schedule of playing live shows, and in 2013 released the album Understated. The LP was made with a core band of multi-instrumentalists like The Rails’ guitarist James Walbourne and long-time drummer Paul Cook (Sex Pistols).

Concurrently he and Grace worked with filmmakers James Hall and Edward Loveless on a documentary that charted his comeback, called The Possibilities Are Endless, a phrase that he repeated over and over while in hospital. The film was released in 2014, along with a soundtrack album, featuring old songs and newly recorded instrumentals, was released at the same time.

Around this time, he and Grace moved to the Scottish Highlands, where they built a new studio called Crashnarrow Studios in Helmsdale, Scotland. In 2017 the BBC named it one of the most stunning places to make music. Acts such as Hooton Tennis Club, Tracyanne & Danny, Spinning Coin and many others have recorded there. Collins’ latest album ‘Bedbae’ was released in 2019 by AED.