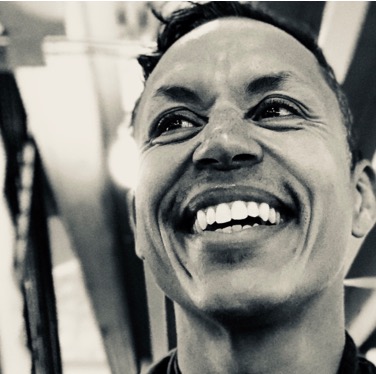 Daniel Alexander Jones is a creator, performance artist, playwright and songwriter who has created, to date, sixteen fully produced works of theatre and performance art, since beginning his professional career. His performance alter-ego, Jomama Jones, has been at the center of several of his works, including Black Light, a critically acclaimed performance piece commissioned by Joe’s Pub’s New York Voices program, that premiered Off Broadway at Greenwich House Theater in 2018, Duat,produced by Soho Rep and Radiate, also produced by Soho Rep . Jomama Jones has released five albums, to date, including the most recent, Aten, in 2021. Jones’s other plays and performance pieces include Phoenix Fabrik, Bel Canto, Bright Now Beyond, and An Integrator’s Manual. He is credited with making a significant contribution to the Theatrical Jazz Aesthetic. In 2021, Jones launched Aten, the first in the ALTAREDSTATES series of multimedia digital performance pieces. The series was produced by CalArts Center for New Performance, commissioned by The Public Theater and New York Live Arts and is a New England Foundation for the Arts National Theatre Project Grantee. In October, 2021, Jones released a collection of his work, a book entitled Love Like Light: Plays and Performance Texts. He is also a recipient of the Creative Capital Performing Arts Award, Alpert Award in the Arts in Theatre, the Doris Duke Artist Award, a Mellon Foundation Creative Research Fellow at the University of Washington, Seattle, the Helen Merrill Playwriting Award, and the Guggenheim Foundation Fellowship. Jones was a 2020 TED Fellow, and a 2021 PEN America/Laura Pels Theatre Awardee.