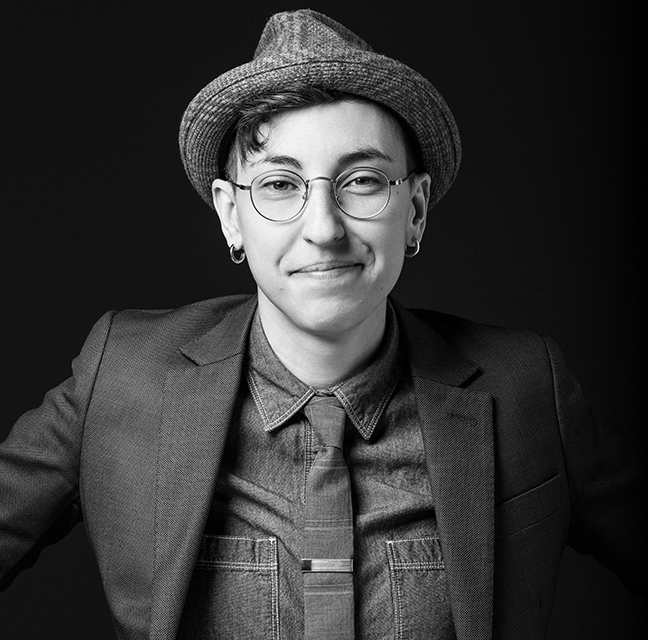 C. Quintana or CQ (pronouns: she/any) is a queer writer with Cuban and Louisiana roots. There is “other” and “in-between” in all of us; CQ tells stories that mine the misconception of dissimilarity and proclaim, “You are not alone.”

Her plays and musicals have been developed and produced with companies including Barrington Stage Company, Southern Rep, INTAR, Lark Play Development Center, Ensemble Studio Theatre, Astoria Performing Arts Center, and more. Her play Scissoring is published and available for licensing via Dramatists Play Service and a monologue from AZUL, which was featured on the 2017 Kilroys List and had its world premiere at Southern Rep as part of the 2019 Tennessee Williams/Saints and Sinners Literary Festival, is published in The Kilroys List: Volume 2. For more, visit NPX.

CQ’s poetry, fiction, and lyric nonfiction is published or forthcoming in Jacar, Santa Clara Review, Wildness Journal, OnCuba, Nimrod Journal, Foglifter, great weather for MEDIA, and beyond. She is the author of the poetry chapbook The Heart Wants (Finishing Line Press), and her poem “She-lium” was featured on Radiolab’s “Elements” episode in collaboration with Emotive Fruition.

CQ’s half-hour dramedy Career Gay was a top ten featured pilot on the inaugural Out in Hollywood list. Her hour-long dystopian drama pilot, Invisible Lily, appeared on the WeForShe “Ones to Watch” List, and she served as Staff Writer on ABC’s The Baker and the Beauty.

She is the recipient of fellowships and residencies from WP Theater, MacDowell (Ernest and Red Heller Fellow), Playwrights Realm, Van Lier/New Voices at The Lark, CubaOne, Queer/Art, and Lambda Literary, as well as commissions from the Kennedy Center, Audible, The Civilians, Palo Alto Playhouse, EST/Alfred P. Sloan Project, Peppercorn Theatre Company, and more. She holds an MFA in Playwriting from Columbia University.